Ambassador Fukushima had a meeting with Mr. Deguchi Daichi, the first prize winner at the 17th Khachaturian International Competition

2021/6/14
From June 6th to 12th, 2021, the 17th Khachaturian International Competition (conducting section this year) was held at the Aram Khachaturian Concert Hall in Yerevan, and Mr. Deguchi Daichi, a Japanese conductor, won the first prize for the first time in conducting category (Note: Tanabe Ayako won in violin category in 2012.). Ambassador Fukushima attended the closing concert, as well as the dinner hosted by President Sarkisian after the award ceremony on the 12th of June․ He congratulated Mr. Deguchi, and talked with the organizers of the competition and the award winners about future music exchange between Japan and Armenia.
The Khachaturian International competition started in 2003 in commemoration of the 100th anniversary of the birth of Aram Khachaturian, a world famous composer of the 20th century. Every year, young musicians from about 20 countries, including the United States, Germany, Japan, China, and South Korea, participate in the competition. The board of trustees consist of President Sarkisian and prominent Armenian musicians, and the jury members include the music director of the Moscow State Symphony Orchestra and others. 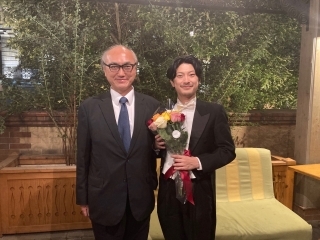 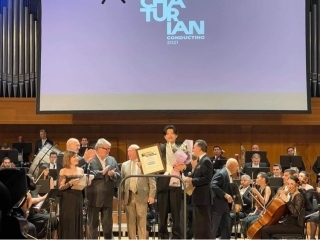