2021/8/6
On August 6, 2021, Mr. Masanori Fukushima, Ambassador of Japan to Armenia, attended the Commemoration ceremony for the victims of Hiroshima atomic bombing at Children's Park in Yerevan. This event is annually held by Hikari Center (President: Ms. Karine Piliposyan).
Ambassador Fukushima, Mr. Safaryan, Head of Asia-Pacific Department of the Ministry of Foreign Affairs, members of Hikari Center, Japanese people living in Armenia and others attended the commemoration ceremony.
At the beginning of the ceremony, members of Hikari Center put flowers by the “Peace stone”, a monument with the stone bombed in Hiroshima. Then the participants observed one minute's silence. After that, Ambassador Fukushima, Mr. Safaryan, and Ms. Piliposyan gave speeches. Ambassador Fukushima prayed for permanent peace in the world in his speech.
In the end, the members of Hikari Center read haiku about peace in Armenian and Japanese, handed out paper cranes to the attendees, and put paper lanterns around the "Peace stone" to commemorate the victims. 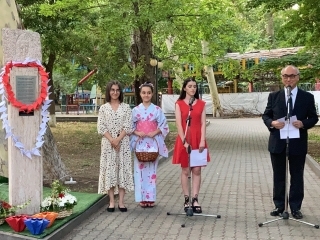 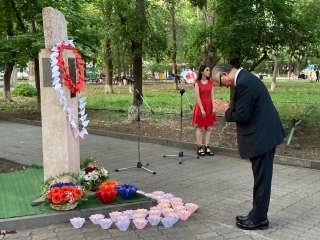